Seeing the Ray Eames splint sculpture at the CALIFORNIA'S DESIGNING WOMEN: 1896–1986 exhibition
made me curious about the number of splint sculptures that were actually made.

The one in the exhibition looks to be the one that was sold at the Treadway auction in 1999.
It came from Park Meek, a former employee at the Eames Office and
apparently it was broken and repaired (by Ray) at one point...more details below.

The Splint Sculpture that was up for auction at Treadway in 1999.
This the description from the catalog...
Saw-cut molded plywood with flat black painted finish, 42"h x 8"w, very good conditionThe estimate was $25,000 - $35,000Provenance: Eames Office
Parke Meek

How Ray's "Splint" Sculpture Got Broken

When I was hired to work at the Eames Office back in 1953, I had no official title. Everyone in those days did a little bit of everything, and I was known as a "jack of all trades".

I started out working on furniture prototypes, but as Charles became interested in film-making, I followed along - setting up lights, cameras, propping and building the sets, etc. It was all very "learn as you go".
In the early 60's we had built a set to showcase a new line of tandem shell seating for the Herman Miller catalog. One of the props we used was a sculpture that Ray had made years earlier from a blank plywood leg splint. She had cut out the "splint" on a jigsaw in the workshop. I think it was one of three she made-Lucia (Eames Demetrios) has one and the other one disappeared from the Office. Each sculpture had different cut-outs.

Anyway, the sculpture was hanging on the wall of the set. All of a sudden, without warning, a 4 x 4 post came crashing onto the set-hitting the sculpture and breaking it. (Fortunately, Charles did not witness this catastrophe.)

Ray and I took it back to the workshop where we tried to put it back together. She glued it and I put a clamp on it. After it dried, she painted it flat black.

In the end, we decided not to use it as a prop after all. When Charles asked about where it was, Ray simply told him that she didn't think that it worked for the shot. Charles turned his attention back to finishing the shot.

Years later, when I told Ray that I liked the sculpture, she let me have it. I think it amused her to see it hanging on the wall of my Venice loft among all my odd collections of things. 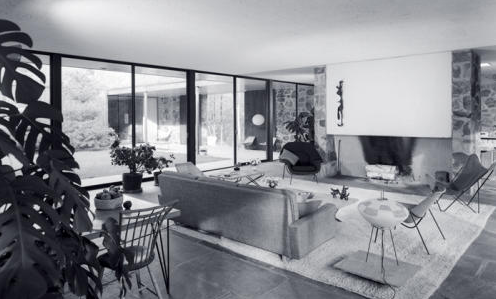 If what Parke states above is true, there were three made and the second one belongs to Lucia Eames.

That means the third one belonged to Eliot Noyes, a friend of Charles and Ray.
It is seen here in 1956 hanging in the house that Noyes designed for his family in New Canaan Connecticut.

The Eames sculpture is nowhere to be seen in 2006.
Though, that is a nice Calder on the ceiling.  It sold at Christies in May of this year for over $6 Million.
Eliot also had a huge Calder in the yard and another mobile in the house.

OK, so where is the splint sculpture?

Eames "Kazam" machine in their Westwood apartment, 1941.
It looks like something cool is hanging up there.

Image: The Story of Eames Furniture